The basis for stereoscopic vision is the display of two images that have certain perspective differences and can be viewed independently by each eye. The combination of both images is then interpreted by the human brain as one 3D image.

Stereoscopic imaging was used in photography as early as the 19th century, through shooting techniques using two lenses to replicate the distance between the eyes. In later years, the technique was also adopted by the film industry for 3D movies, where the two offset images are displayed in different colors. This technique is called anaglyph image, and the glasses with the two color filters are called color filter glasses or anaglyph glasses.

In film, television and video technology, processes with polarized images are used in which two images are displayed with rotated polarization planes. Polarization glasses are available for viewing. Another 3D display technique works with two different consecutive frames that are displayed one after the other and separated with shutter glasses, so that one eye sees the first image and the other eye the second. The latter technique is also used in 3D television( 3DTV). 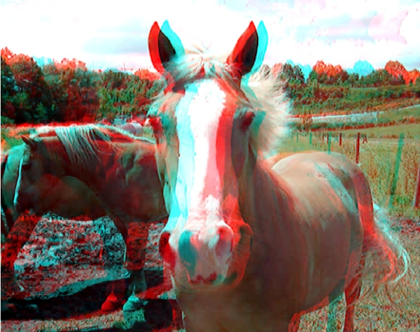 The glasses technique has several disadvantages, such as for spectacle wearers, who would have to wear the 3D glasses over their glasses, and the light attenuation it causes, which swallows a large part of the light intensity. In the meantime, the 3D display technology has been further developed towards a three-dimensional display without special glasses. This has changed the terminology from stereoscopic display to autostereoscopic. 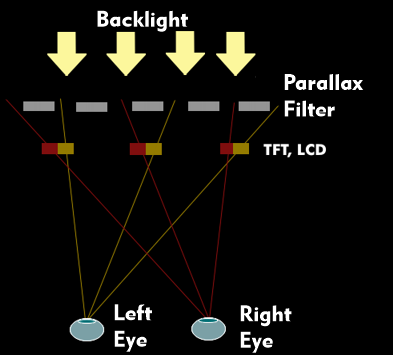 In autostereoscopic displays( ASD), two images are shown offset. The images have the same offset as in natural viewing. The display technology uses parallax barriers for the display, as they were used in the past. To enable the display to be used for both three- and two-dimensional representations, the parallax filters are switchable. This ensures that each eye can only see one of the two images: the right eye the right image and the left eye the left image. The switchable parallax filter is located between the backlight and the LCD or TFT plane. However, the 3D display is extremely limited in terms of the viewing angle. Theoretically, only one person can view the 3D display and this person has to sit centrally in front of the 3D display.

For a two-dimensional display, the parallax filter is turned off, which causes the backlight to illuminate all TFT or LCD pixels evenly. In this mode, the display corresponds to an LCD display or a TFT display.