Due to the increasing proportion of electronics in motor vehicles and the resulting decline in the performance of the 14-V on- board network, the automotive industry had envisaged converting the on-board networks to the higher battery voltage. The approach to a 42-V on-board network was also due to driver assistance systems and in-vehicle infotainment( IVI).

This change is intended to reduce the power losses associated with the increasing energy demand in motor vehicles. Whereas in the 1970s an electrical system had a power requirement of 600 W, in modern motor vehicles this had more than tripled by the year 2000. In the starting phase alone, the power requirements are up to 8 kW. In addition, the higher on-board power supply voltage, which comes from a 36 V car battery, increases the efficiency of the actuators and reduces fuel consumption due to the lower line losses. In addition, many actuators require high supply currents, which are reduced with the 42 V on-board network compared with the 14 V network. This in turn means that the cable cross-section can be reduced, which results in weight savings due to thinner cables. Consumers with high supply currents include the electric motors for the window lifters, seat adjusters, windshield wipers, as well as for the starter, horn, air conditioning, diesel injection, transmission control, power steering and many others. 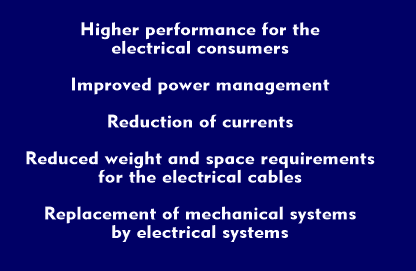 Activities for the 42-V electrical system were discontinued in Europe due to a lack of standards and additional costs. Instead, since 2010, German automakers have been pursuing the concept for a 48-V on-board network to complement the 12-V on-board network.