The 32-bit K7 microprocessor of the seventh microprocessor architecture from Advanced Micro Devices (AMD) is also known as Athlon; however, there are other K7 versions codenamed Thunderbird, Thoroughbred, Spitfire, Mustang and Barton.

The K7 competes with the Pentium 4. It is multiprocessor capable, has a superscalar floating point module, three arithmeticunits( ALU) and three floating point units( FPU), a ten-stage pipeline for the ALUs and a 15-stage pipeline for the FPUs, and an internal CPU bus with a clock speed of 200 MHz. The Athlon introduced in 1999 clocks at 600 MHz and 750 MHz, it consists of 22 million transistors, has CMOS technology with a structure track width of 0.18 µm.

The various K7 versions have clock frequencies of 1.4 GHz (Thunderbird), 1.8 GHz (Thoroughbred) and well over 2 GHz (Barton). In the latter, a technological leap takes place in terms of the number of transistors. The Barton has 54.3 million transistors. 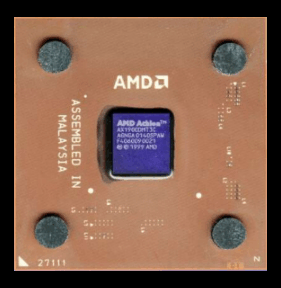 The K7 is operated in CPU socket A with 462 connections.