The advantage of such analog active filters is that only resistors and capacitors are used as passive components; inductances are simulated by circuitry. Especially at low filter frequencies, the inductance ofLC filters would have to be very large, which would result in a low quality factor (Q). The resonance curve would have a low slope and would therefore be flat. 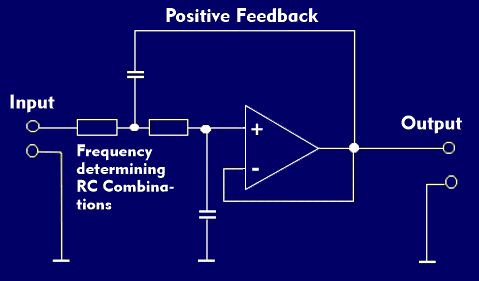 The Sallen-Key circuit has an operational amplifier that is operated with a gain of 1. The circuit can operate as a high-pass or low-pass filter, and the frequency-determining components are in the input circuit and the feedback path. The ratio of the ohmic resistances and the capacitances determines the cutoff frequency of the filter.

In the inverting multiple-feedback circuit, the output signal of the operational amplifier is applied to the negative amplifier input. As with the Sallen-Key circuit, the frequency-determining components are in the input circuit and in the feedback path. The gain factor is arbitrary.