The Industrial Internet of Things( IIoT) is, among other things, about universal concepts for process automation in which the various fieldbuses can be integrated. Ethernet lends itself to this, and is increasingly being implemented in industrial plants with Industrial Ethernet. Like no other network technology, Ethernet supports time-critical and error-free applications.

As far as the implementation of Ethernet in process automation is concerned, networking concepts for industrial applications can be based on the Ethernet layer model with the OSI reference model. The transport-oriented layers - physical layer, linklayer, network layer and transport layer - can be used directly or with extensions in terms of protocol assignment. This applies to the transport and network layer with the TCP/ IP protocols residing on it and the link layer, which include the media access method, real-time Ethernet and time-sensitive networking( TSN). Only the physical layer is divided into the Ethernet-relevant sublayer and the extended physical layer, the Advanced Physical Layer( APL), which is used to map the physical layer. The APL layer forms the common physical layer for all communication protocols and supports communication from the operating technology to the field level. 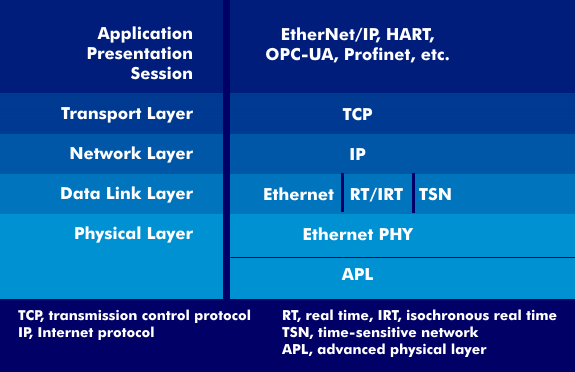 The application-oriented layers 5, 6 and 7 contain the protocols for the fieldbuses: EtherNet/IP, HART-IP, Profinet, Open Platform Communications Unified Architecture( OPC-UA) and others.

The APL layer, specified by the IEEE802.3cg working group, is independent of existing protocols and extends the limited distance range of fieldbuses with 10Base- T1 to 1,000 meters. The data rate is 10 Mbit/s. SPE cabling with single-pair Ethernet (SPE) is used as the transmission medium. Instruments and field devices can also be supplied with power via the two- wire line: Power over Data Lines( PoDL).