AD converters, English: Analog toDigital Converter( ADC or A/D) are electronic circuits for digitizing analog signals. They operate according to different conversion methods in which a continuous analog signal is quantized in amplitude and time.

AD converters differ in the type of quantization, conversion speed, coding and resolution with which they digitally emulate analogsignals. Furthermore, in the converter linearity, the zero point or offset error and the quantization error as well as in the signal-to- noise ratio( SNR) and dynamic range.

Since the analog signals to be digitized are generally changing signals, a sample-and-hold (S/H) element is connected upstream of the actual DA converter. The voltage temporarily stored in the sample and hold (S/H) circuit is then quantized in the D/A converter and encoded in by means of a dual system. 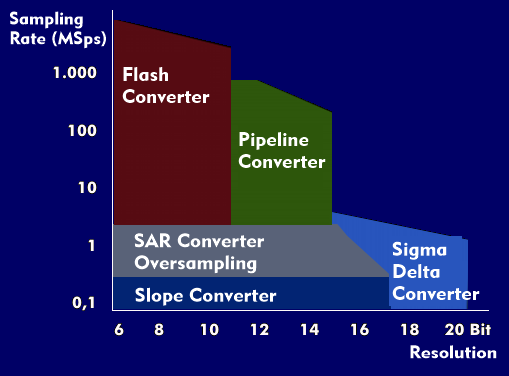 Classification of A/D converters according to sampling rate and resolution 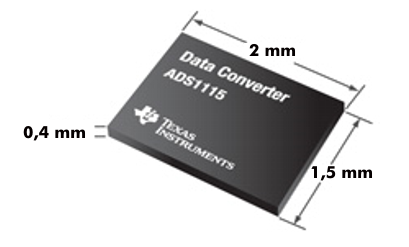 The power consumption depends on the technology and is 1 mW to 2 mW when CMOS technology is used. In terms of nonlinearities, values of +/- 1 Least Significant Bit( LSB) are achieved when integral nonlinearity and differential nonlinearity are included. This means that the smallest bit value can fluctuate by one digit. In addition to the described conversion principle, in which a voltage is digitized, there is another basic principle with the time-to- digital converter(TDC) in which the time difference is digitized.