Thus, on the application layer, there are services for network management such as the Common Management Information Protocol( CMIP) of OSI or the Simple Network Management Protocol( SNMP) with TCP/ IP, electronic mail according to X.400 and as Simple Mail Transfer Protocol ( SMTP), directory services, which with Open Systems Interconnection (OSI) are according to X.500 and, for TCP/IP, according to the Network Information Service( NIS), file transfers according to File Transfer Access and Management( FTAM) for OSI and the FTP protocol for TCP/IP, terminal emulations as Virtual Terminal( VT) or according to the Telnet protocol, and remote procedure services according to Remote Operation Service Element( ROSE) for OSI and the Remote Procedure Call( RPC) for the TCP protocol. 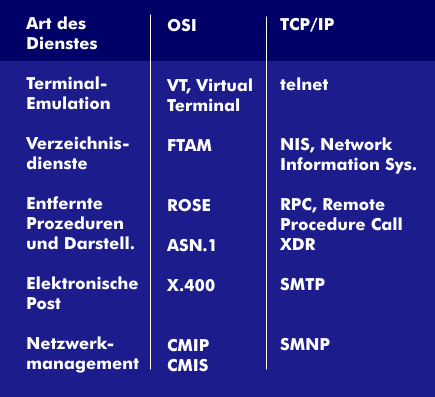 Application services of OSI and TCP/IP

The services offered also include the extensive range of web services that users can access via the Internet regardless of their location. The functionality of the services is ensured by the consulting and support services also offered to the user.