In large networks with several identical or different network structures, a backbone forms a separate infrastructure for the exchange of information between the networks and systems. A backbone network is such a backbone, reflecting the data rates of all connected networks and end devices.

A backbone is a high- performance network of magisterial character that allows the connection of many regionally or locally distributed networks, subnets, terminals and terminal clusters. It is a main network with which local area networks( LAN), private branch exchanges, terminal networks and IT systems are interconnected. Backbones are equally present in local networks, city networks, wide-area networks and on the Internet and are characterized by special security technologies and extremely high data rates; which is why they are also implemented in fiber optics. 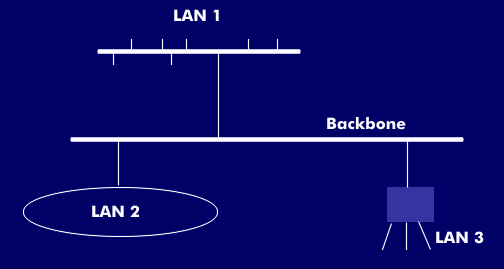 Basic concept of a backbone with different LANs

Due to the many possible combinations that the basic structure allows, various areas of application crystallize in backbone technology in the in-house area, in data packet networks, in the regional area( MAN) and in the wide-area traffic area. The backbone concept distinguishes between collapsed back bones and distributed backbones.

The different backbone structures in the LAN

Collapsed back bones are centralized backbone structures that operate with an active distributor. They are shrunken backbones that focus on the backplanes of hubs or switches, where the internal buses converge. Distributed back bones are decentralized backbones that operate according to the backbone structures specified in the cabling standard, with a building backbone and floor distributor.

A backbone typically has a higher transmission capacity than the networks connected to it because it must carry many times the traffic of a single local network. This includes the fact that the backbone supports isochronous transmission and anisochronous information transfer and does not penalize any traffic flow to and from the connected networks and systems. The performance of a backbone is determined in particular by the access computers and their protocol implementation.