In network technology, the physical and the logical topology, which do not have to be identical, stand for the configuration and the connection of the network nodes with the end devices. Each topology, of which there are various variants, has its specific applications and advantages. In the bus topology, for example, all subscriber stations are connected to a common transmission medium. In this configuration, subscriber stations can be added or removed.

The bus topology is characterized by a transmission medium to which many stations are connected. This topology is referred to as a shared bus. All devices connected to a shared bus - processors, memory, subsystems - work together and jointly perform a specific task.

Alternatively, there is a constellation with a central control unit. This constellation is called a hierarchical bus. The individual components are called by the central control unit. The transmission medium - a coaxial cable or a TP cable - has a bus termination at both ends that corresponds to the impedance of the cable. As a result, the signals at the cable end are absorbed by the impedance and not reflected.

In a bus topology, transmission takes place directly between the network node and the subscriber device or between the subscriber devices. Since many terminal devices can be connected in a bus topology at the same time and probably also want to communicate at the same time, access to the transmission medium must be regulated by an access procedure. 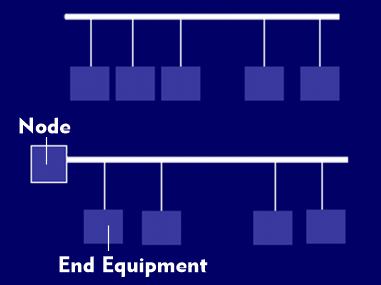 Bus topology without and with central control unit

Such an access procedure ensures that the transmission is exclusively allocated to a station that is ready to transmit. All other stations have to wait until they are allocated the access right. Since stations typically compete with each other in decentralized control, collisions can occur that affect signal transmission. To avoid collisions, subscriber stations check for activity on the transmission medium. Only when no activity can be detected is a station authorized to transmit. This access method is called Carrier Sense Multiple Access with Collision Detection, CSMA/ CD. In another method, token passing, the right to transmit is passed on to a successor.

The advantages of bus topology are its easy extensibility, modularity, simple implementation and decentralized control. Disadvantages are the susceptibility to failure of the medium, the lack of interception security and possible unpredictable waiting times.

Typical representatives of bus topology are Ethernet( IEEE 802.3) and Token Bus, where decentralized switching control is based on an imaginary (logical) ring.