The name button cell, button cell or coin cell, is due to the shape and size of these flat, round batteries, which resemble a button or coin. Button cells, which are used in small devices such as wristwatches, calculators, digital cameras or as hearing aid batteries, come in a wide variety of sizes and thicknesses. They are characterized by a long service life and are particularly suitable for devices with low power requirements.

Button cells are available as zinc- silver oxide batteries( SR), lithium-manganese dioxide batteries ( CR), alkaline-manganese batteries (LR) and zinc-air batteries( PR). The designations in brackets represent the type designation and have been defined by the International Electrotechnical Commission( IEC). The type designation is composed of the two letters for the cell technology and four digits; two indicate the diameter in millimeters and the other two indicate the thickness in tenths of a millimeter. Example: LR 2450 stands for an alkali-manganese cell with a diameter of 24 mm and a thickness of 5.0 mm. 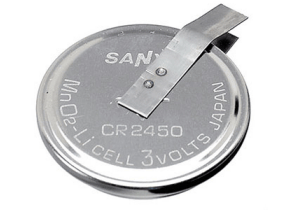