A byte is a unit of data used by most computers to represent a character, letter, or number. Normally, four bytes are combined to form a data word. Such a unit of four bytes can be read and processed as an instruction by 32-bit processors. Other processors are geared for smaller data words of two or one byte. 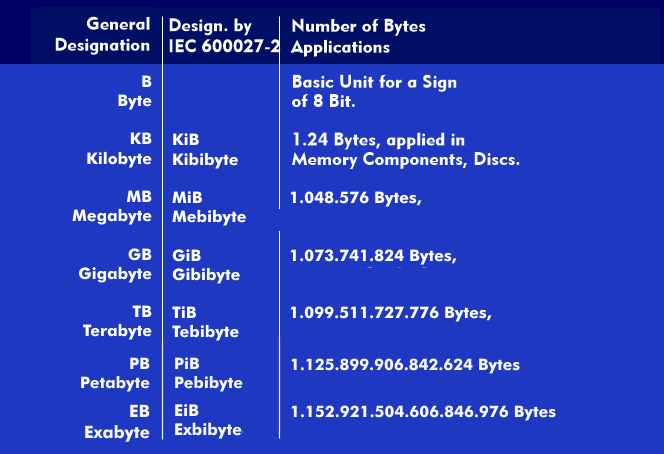 In terms of memory technology, a byte is the smallest addressable unit of memory and allows 256 (`2^8`) different addresses or characters (e.g. digits, letters, special characters) to be addressed or represented. The byte is usually provided with a prefix, so with kilo as kilobyte( KB), megabyte ( MB), gigabyte ( GB), terabyte ( TB), petabyte ( PB), exabyte ( EB), zettabyte (ZB) or also yottabyte (YB). For kilobytes (KB), note that the "K" appears as an uppercase letter because it is `2^10` or 1,024 and not 1,000 as in a lowercase "k".

For certain addressing, a byte is divided into two times four bits. This unit is called half byte, nibble or quad bit.