Chirp Spread Spectrum(CSS) is a modulation technique developed by Nanotron Technologies, Berlin. It is based on the so-called chirp pulse, a swept frequency pulse that passes through a specific frequency band within a short period of time.

The CSS technique belongs to the spread band technology and is also called chirping. The amplitude of the chirp pulse is constant, and the frequency changes within a fixed time between the initial and final frequency. 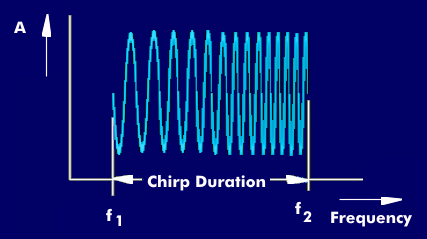 This chirp pulse method is part of Multi Dimensional Multiple Access( MDMA) and is targeted for industrial use in sensor- actuator networks, building automation, RFID and wireless multimedia.

The IEEE has included CSS modulation in the a version of the 802.15.4 standard, which also gave rise to ZigBee. CSS modulation is also used in Nanotron's nanoNET. 802.15.4a and nanoNET used the license-free ISM band at 2.4 GHz for transmission and achieve a maximum transmission rate of 2 Mbps at ranges of up to 900 m outdoors and 60 m indoors at data rates of 1 Mbps.