The word coding is mainly used in Anglo-Saxon literature, in German-language literature one speaks of transmission procedures. The aim of coding is to transmit the data with the highest possible quality and to present it to the user.

During coding, each individual character of a certain character set is transferred to the corresponding character of another character set. Different values or states can be assigned to each signal element. In addition to the state definition, multi- level voltage values of certain duration can be assigned to the signals. The coding methods, of which there are about 50, are optimally adapted to the signal to be coded, the transmission technology and the application.

During transmission, the data to be transmitted is encoded in a coder and transmitted by the transmitter. On the receiving side, the received data signal is first decoded in a decoder and is then available again in its original form. There are various coding methods for encoding, which differ in the way they are implemented.

Coding at the signal source and on the transmission channels

The main distinction is made in the point on the transmission path where the signal is coded. Source coding, for example, takes place directly at the signal source and frees the signal from superfluous and redundant information. Line coding adapts the signal to be transmitted as optimally as possible to the properties of the transmission medium, and channel coding inserts redundancies and detects and corrects transmission errors in the channel. 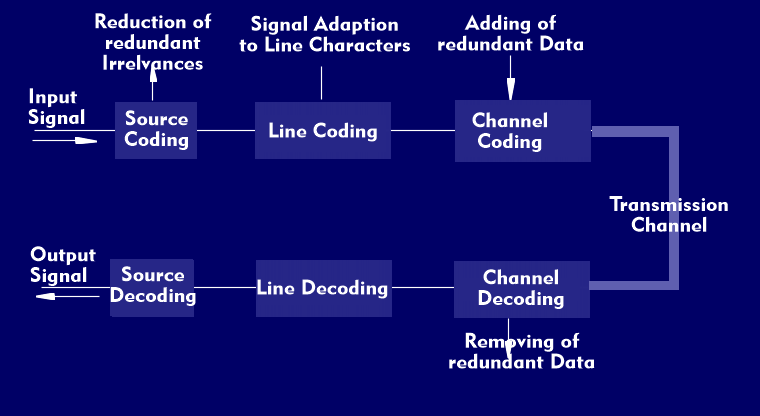 Source, line and channel coding in the block diagram