Conductivity is a measure of the mobility of the free charge carriers - electrons or ions - in a material and thus tells us something about the material's ability to conduct electricity. Conductivity is expressed in Siemens per meter (S/m) or meters per ohm x square millimeters (`m/(ohm) * mm^2`) and corresponds to the reciprocal of resistivity. Formula symbols for conductivity are the Greek letters Sigma 'sigma' or Kappa 'kappa'.

Conductivity applies equally to solids and liquids, to conductors, semiconductors and non-conductors. In electron transfer, conductivity depends on the number of free electrons and thus on the band gap between the conduction band and the valence band. 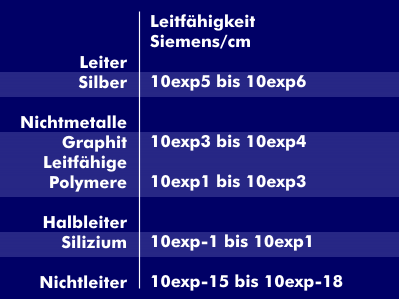 Conductors have no band gap, electrons can move from the valence band to the conduction band. This means that conductors have a high conductivity, ranging from `10^5` to `10^6` siemens/cm (S/cm) depending on the material. Non-metallic conductors such as graphite reach `10^3` and `10^4` and conductive polymers 10 to `10^3 S/cm`. Semiconductors, on the other hand, have a small band gap that depends on external influences such as light or temperature, which increases conductivity. For example, the values for germanium and silicon are between 1 and `10^-2`. In the case of non-conductors, this band gap is particularly high, there are no free electrons and the conductivity reaches values of up to `10^-18` S/cm.