CCT temperatures distinguish the finest white gradations, which are classified in binning and reflected in the color perception and characterize white as having a yellow, orange or blue cast. The Correlated Color Temperature, given in Kelvin (K), represents the various shades of white. Cool white has the CCT range between 10,000 Kelvin (K) and 4,500 K, the CCT range of neutral white is between 4,500 K and 3,500 K, and that of warm white is between 3,500 and 2,540 K. 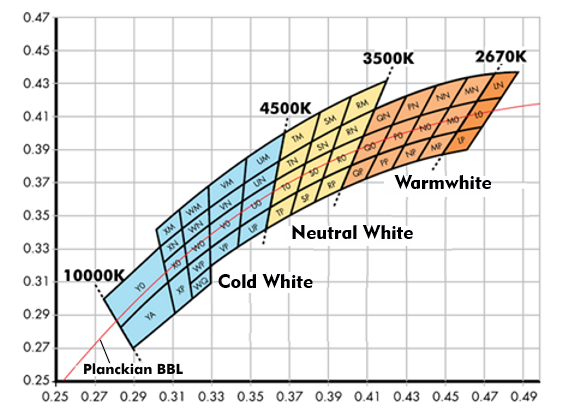 In the CIE color space, the white binning areas are precisely specified by ANSI, fixed in their color temperature and coordinates, and identified with combinations of letters. For example, the color space for bin "WA" has x-coordinates between 0.329 and 0.308 and y-coordinates between 0.331 and 0.311 and a typical Correlated Color Temperature of 6,300 K. The different shades of white are taken into account accordingly in the development of white LEDs(WLED). As a result, the range of WLEDs can be further differentiated in terms of the color cast of WLEDs beyond the basic classification into cool white, warm white and daylight white.