The coulomb (C) is a meter-kilogram- second unit of electrical energy. It corresponds to the transferred electrical charge provided within one second by a constant current of 1 ampere, i.e., one ampere-second( As) or 1C. Coulomb is named after the French physicist Charles Augustin de Coulomb (1736 to 1806), who formulated Coulomb's law.

Coulomb's law describes the force between two point charges. If two point charges Q1 and Q2 are at a distance "r", they are attracted or repelled from each other by a force "F". The force (Fr) is given by Coulomb's law. Here (Epsilon) = `8.85419*10^-12` As/Vm is the absolute dielectric constant. 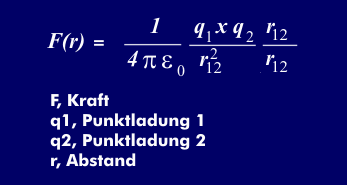 For charges of the same polarity, the force between the charges is repulsive; for charges of different polarity, it is attractive. The force decreases with the square of the distance "r". For more than two charges, the force vectors are added. Coulomb's law is used, among other things, in the calculation of attractive forces in ionic bonds.