To convert hand movements into control signals for the computer, there are special gloves that are equipped with many sensors to detect all movement changes, flexion changes and position changes of the fingers.

Data gloves are worn by the user like gloves and transmit the movement changes as three-dimensional control signals to the computer via a connecting cable. To enable the user to interact in a virtual 3D environment, the position of the hand in space is determined and the hand is projected into the virtual three-dimensional computer display. 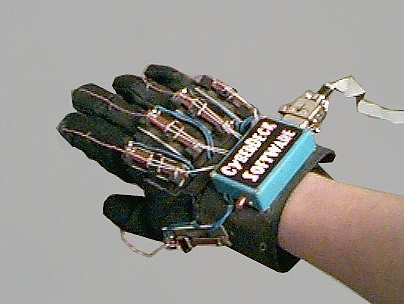 Data gloves are used in robotronics, cyberspace and virtual reality( VR). They are input devices for three-dimensional motion sequences for control and orientation in virtual environments, but can also sense and sensitively feel objects, the tactile feedback. Programmable stimulators are built into the data glove for these applications.