Decibel (dB) is the logarithmized ratio of two electrical quantities(voltage, current, power). The Bel was named after the Scottish inventor Alexander Graham Bell (1847-1922), who also invented the telephone. The unit Bel corresponds to the signal attenuation in a telephone wire over a length of one mile. Originally, this dimensionless unit was used to compare the powers at the input and output of a transmission medium. The decibel is one-tenth of a Bel; although the base unit Bel is not used. 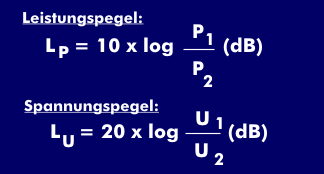 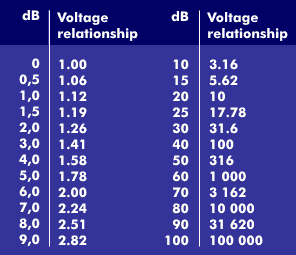 Since oscillation widths(amplitudes), i.e. voltages, tend to play a role in communications technology, the attenuation ratio is defined as the logarithmic ratio of the input voltage to the output voltage. A difference of 6 dB between input and output corresponds to an amplitude drop to half, 20 dB to one tenth. So that the absolute voltage value can also be determined, two reference values have been defined: the dBV and the dBu. The former refers to an effective voltage of 1 V, the latter to 0.7746 V at 600 ohms, corresponding to 1 mW. 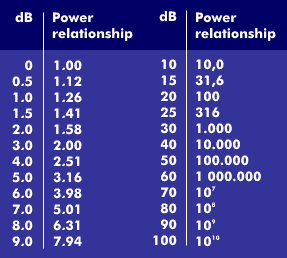 The great advantage of the dB calculation is that when several lines or quadrupoles are connected in series, the dB values for the attenuations and gains simply have to be added or subtracted.