Dense Wavelength Division Multiplexing (DWDM) is an optical wavelength division multiplexing with the enormous performance of more than 10 Tbit/s, which is standardized in the ITU standard G.694.1.

DWDM technology uses the wavelength range between 1,260 nm and 1,675 nm for wide- area transmission, which is divided into three wavelength bands, the S-band, C-band and L-band. 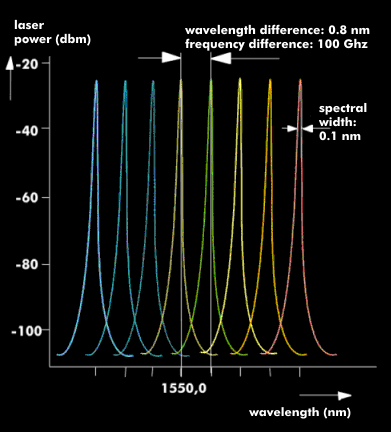 The wavelength of the optical window at 1,550 nm is used as the fundamental wavelength, onto which up to 160 different wavelengths are symmetrically modulated. These are then transmitted via an optical fiber and separated from each other again on the receiving side by optical filters. 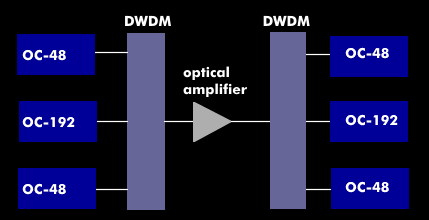 The channel spacing is 0.8 nm. The 0.8 nm spacing corresponds to a 100 GHz spacing between two channels and is referred to as the ITU grid. Other standardized channel spacings are 50 GHz, 25 GHz and 12.5 GHz, corresponding to wavelength spacings of 0.4 nm, 0.2 nm or 0.1 nm. Systems with 16 to 64 channels are currently on the market. For range, the International Telecommunication Union (ITU) has specified distances of 80 km, 120 km and 160 km for SDH optical interfaces, known as Long Haul( LH), Very Long Haul( VLH) and Ultra Long Haul( ULH).

The conditions for DWDM technology have been created by advanced semiconductor technology, which provides Distributed Feedback Lasers( DFB) with a narrow spectral bandwidth so that multiple transmission channels can be implemented in one optical window. In addition, coupler technology enables much smaller channel spacing because it has steep filter curves and high stopband attenuations. The same is true for optical amplifiers( OA) and fiber amplifiers, such as the erbium doped fiber amplifier( EDFA).