The spread spectrum technique, Direct Sequence Spread Spectrum (DSSS), is a radio transmission method used in WLANs and employed in IEEE standards802.11 and IEEE 802.15.4. The band spreading technique is relatively insensitive to narrowband interference signals because they are not spread over a wider frequency spectrum.

During spreading, the bits of the user data are spread with the spreading sequence. This spreading results in a high-bit-rate code sequence, which is called a chip sequence to distinguish it from the bit sequence. The"chips" represent the smallest spread information units. The chip rate depends on the spreading factor. This corresponds to the quotient of the chip rate to the bit rate. The wider the spread, the less susceptible the transmission is to interference from signals of other users. At the same time, spreading provides a certain degree of protection against unauthorized eavesdropping.

In spread spectrum technology, the signal to be transmitted is spread over a wide range of frequencies, and spreading is achieved by modulating the carrier frequency with a pseudostatistical spreading code. 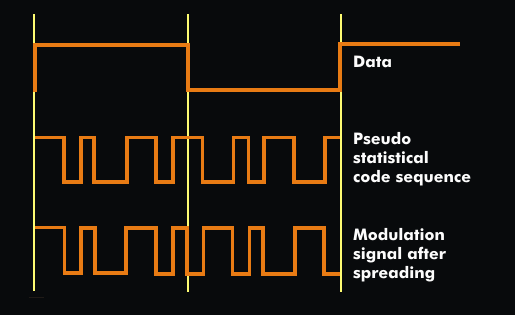 Principle of spreading in the spread spectrum technique 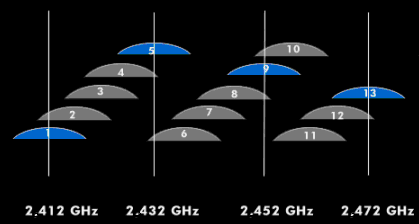 The ratio of spread bandwidth to transmission speed is called spread ratio. If this ratio is 10, the transmission and security conditions are ideal. In practice, this ratio is given when, for example, a 2-Mbit/s signal is spread over a bandwidth of 20 MHz. The spreading gain, which is the ratio of the clock rate of the data stream to the clock rate of the code sequence, is also a measure of the immunity to interference for the signal to be transmitted.

The DSSS technique is particularly suitable for environments with narrowband interference signals. This technology can be used for point-to-point and point-to-multipoint connections of several LAN segments over several kilometers at 10 Mbit/s.