For the digitization of analog signals, there are several converter processes that differ in the conversion speed, quantization, coding and resolution. The dual-slope method is a modified slope method and belongs to the slower methods of the A/D converters. 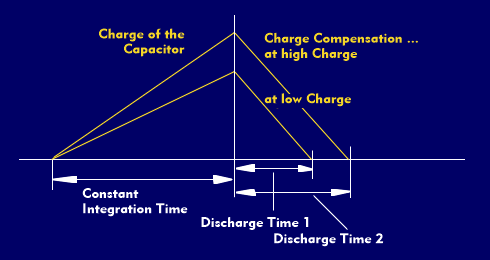 How the dual-slope method works

To measure the discharge time as accurately as possible, it is used as the gate time. In the gate time, short duration clock pulses are fed to a GLUE (General Logic Unit Expansion) logic with counter, which counts the clock pulses and derives the value for the input voltage. Similarly, as with the slope method, one could use a comparator that allows clock pulses to pass at a predefined slope voltage, which are counted in a counter.

A/D converters that work according to the dual-slope method are relatively slow and are used in digital multimeters, among other things. Their accuracy is around `10^-4`. The resolution of dual-slope converters is relatively high and may well be 16 bits or more.