The Equivalent Isotropically Radiated Power (EIRP) is a quality measure for the radiated power of antennas, which includes the parameters transmit power and antenna gain. The EIRP is a theoretical value that refers to an isotropic spherical radiator, a point source of radiation. It is calculated from the ratio of the antenna power to the power of a theoretical isotropic antenna and is expressed in watts (W) or decibels watts( dBW).

The isotropic radiated power indicates the power that would have to be fed into an isotropic omnidirectional antenna to produce a far field having the same power density in decibels isotropic( dBi) as a directional antenna in its main beam direction. The EIRP value is the sum of the transmit power in dBm and the antenna gain in dBi. For example, if the transmit power is 10 dBm and the antenna gain is 8 dBi, then the EIRP is 18 dBm. 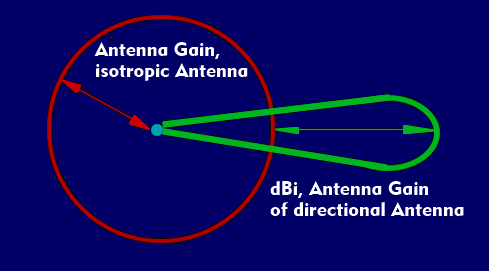 The EIRP is specified for transmitting equipment and antenna equipment in satellite networks and mobile networks, as well as for access points and antennas of WLANs. It is the transmit power that is required by law. In the case of transponders, EIRP is an important characteristic value, since this value is decisive for the field strength with which the downlink signal of the transponder arrives at the ground station. For example, the EIRP value for Eutelsat is about 50 dBW. The satellite operators provide EIRP maps for the footprints to receive the satellite signals.