The Exterior Gateway Protocol (EGP) is located on the network layer of the OSI reference model and is based on the IP protocol. The EGP protocol is used for communication between routers and is used to interconnect several complex networks that form a self-contained world and only occasionally communicate with other networks.

The Exterior Gateway protocol is mainly based on three mechanisms: 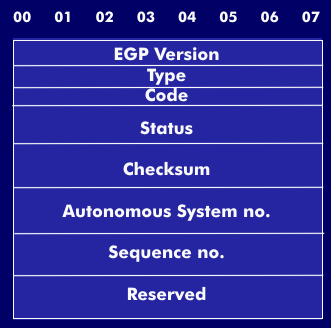 Data frame of the EGP protocol

The EGP header consists of the 8-bitversion field, the EGP type, code field, and status field data fields of equal length, and four 16-bit fields: the checksum field, the autonomous system data field, the sequence number field, and a reserved data field. The EGP version field specifies the version of the EGP header used. The EGP Type field defines what type of message it is and allows the router to specify the type of EGP message when transmitting over networks.

The EGP-Code field specifies the type of AGP type in more detail. It specifies whether it is a command or a response to a command. The status field handles the polling and acknowledgement modes. The EGP protocol is described in RFC 904.