FDDI was the first international standard for a high-speed network in 1989. Fiber Distributed Data Interface (FDDI) is an ISO standard for a 100 Mbps token ring, proposed by ANSI in working group X3T9.5. The FDDI protocol is one of the few access methods specifically designed for high transmission speed and for the use of optical fiber.

The structure of the FDDI ring

The FDDI ring FDDI ring consists of two rings, a primary ring and a secondary ring, and can serve up to 1000 stations over a maximum length of 100 km to 200 km. Therefore, it can also be considered as a backbone. For reasons of reliability, fiber optic twisted pairs are mainly used. The standard provided for four fiber optic alternatives, namely 100/140-, 50/125-, 62.5/125- and 85/125-µm fibers. Light sources of 1,300 nm or 850 nm were specified as wavelengths. In practice, gradient fibers with 62.5/125 µm core/ cladding diameter and 1,300 nm light sources have ultimately become established. 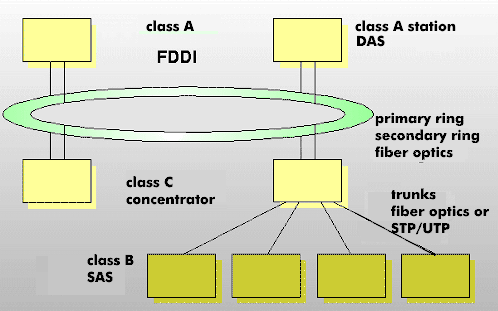 FDDI also supports single- mode fibers in the main ring, while TP cables are also used for the coverage sub-areas extending from the ring. The MIC connector, which is defined in ISO 9314-3, is used as the FOconnector for the optical fibers.

To bridge line faults, FDDI is based on two rings, the primary ring and the secondary ring, both of which transmit the data in opposite directions. The secondary ring is usually operated as a backup ring only. However, ANSI does not exclude its use for capacity enhancement, the dual MAC option. In principle, the topology is comparable to the Token Ring. There are stations with two or four ports for optical fibers.

The stations of the FDDI ring 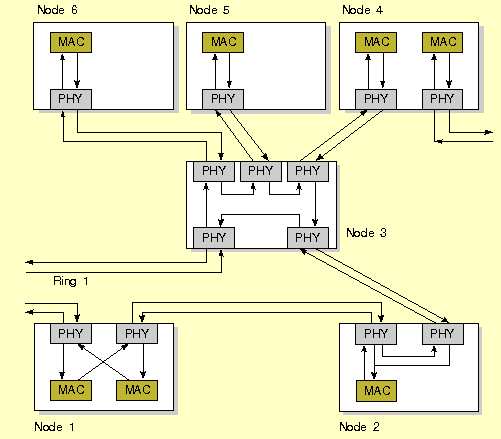 The stations with four ports are directly connected to the double fiber optic ring (Class A), for the stations with two ports (Class B) there is a concentrator (Class C), which is connected to the main ring and can perform the backup functions in the manner of a ring line distributor. Class A and C stations are also called Dual Attachment Stations( DAS), Class B accordingly Single Attachment Stations( SAS). In the connection range up to 100 m, STP cables and UTP cables can also be used.

The FDDI access protocol essentially corresponds to the token ring protocol according to IEEE 802.5. A fundamental difference arises in the way a free token is generated by the transmitting station after a transmission has been completed. Within FDDI, a station places the free token on the ring immediately after sending the last data packet within the maximum transmission time.

Despite its high data rate, FDDI can only be used for real-time applications to a limited extent. In standard operation, transmission delays of up to 200 ms occur with 50 active stations, which far exceeds the maximum tolerable value of 10 ms. However, in so-called synchronous operation, it is possible to assign a fixed transmission bandwidth to certain stations. The resulting transmission delay can thus be reduced to 8 ms to 16 ms.