The file format defines the content offiles, their syntax and semantics. These are agreed conventions of the internal structure, how information of a certain data type, for example text, graphics, video, audio, tables is arranged. Only if these conventions are observed for the various file formats can computer and application programs read these file formats.

In order for file formats to be used, they must also be able to be interpreted by the application programs. This interpretation is done by the operating systems, which assign the file formats to the application programs via the file name extension, the File Extension. The file extension is added to the file name as a two-, three- or four-letter extension, separated by a period. There are hundreds of file extensions, which can be distinguished and classified according to the type of content - text, graphic, photo, audio, video, compression, etc. - and can be classified accordingly. Likewise according to the application.

The most commonly used file formats are those for multimedia , for texts, photos, audios and videos. The most popular text file formats are the ASCII character set with the extensions *.txt, *.asc or *.html. There are also several graphics file formats, which can be divided into vector-oriented and pixel-oriented, and file exchange formats, such as the Bitmap file format (*.bmp), Encapsulated Postscript File ( EPS) (*:eps), Graphics Interchange Format( GIF) (*.gif), Tagged Image File Format ( TIFF) (*.tif, *.tiff), etc. 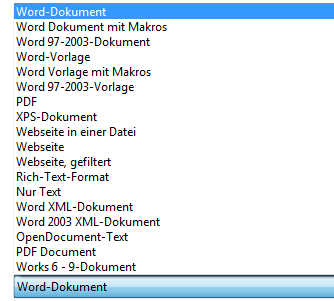 The file extensions of the mentioned file formats also differ in terms of version. For example, Word documents alone can have over ten different file formats. In addition, there are many proprietary file formats.