First In First Out (FIFO) is an overflow principle in memory technology and shift registers. With this technique, when the memory capacity is fully utilized, the first data unit entered or the first backup read in is also the first to be read out or deleted again.

The FIFO method is a simple queuing method. It is used, among other things, in the processing and transmission of data, namely for the input and output queues of the network nodes. 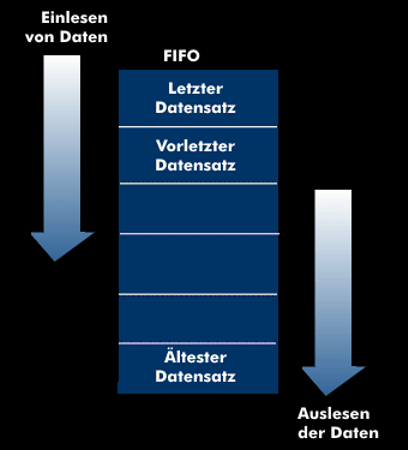 FIFO principle: The data records read in first are also read out first.

With this method, also known as First Come First Served( FCFS), all frames are stored in a single queue, in the order in which they arrived. Readout is done sequentially according to the order they arrived. FIFO has a small delay time.

If the last data read in is read out first when the data is read in and out of the stack memory, then the procedure works according to the Last In First Out( LIFO) principle.