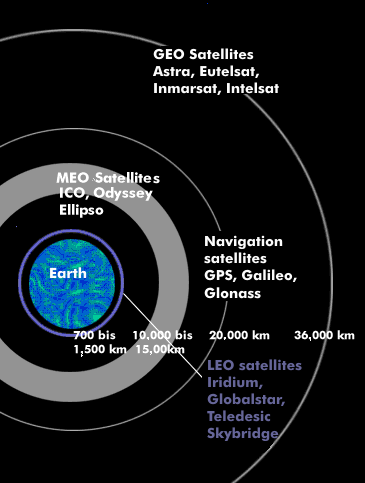 GEO satellites have a large footprint on the Earth's surface when their beams are not focused on specific regional areas. To ensure that the exact same hotspot is always illuminated, special antennas are used that are adjusted accordingly as the satellite rotates. These antennas are called despun antennas. Because of the exact stratification possibilities, GEO satellites are used for broadcasting services such as DVB Satellite( DVB-S) or Satellite DAB( S-DAB). They are unsuitable for telephone services because the delay times to and from the satellite and the propagation times in the transmitting and receiving facilities can total more than 300 ms and thus adversely affect voice communications. These high latency times also impair interaction when used as satellite Internet.

Overview of the different satellite orbits