In general, insulation is understood to mean all measures to protect conductors, conductor paths and contacts of all kinds against faulty currents and contact. In the case of electrical cables, the non-conductive insulating material consisting of plastic surrounds the electrical conductor.

This plastic material also affects the transmission properties of the cable, as well as its mechanical strength, bending radius, and temperature and fire behavior. Depending on the insulation resistance of the material, cross currents form between the cores, which can affect the cable impedance. 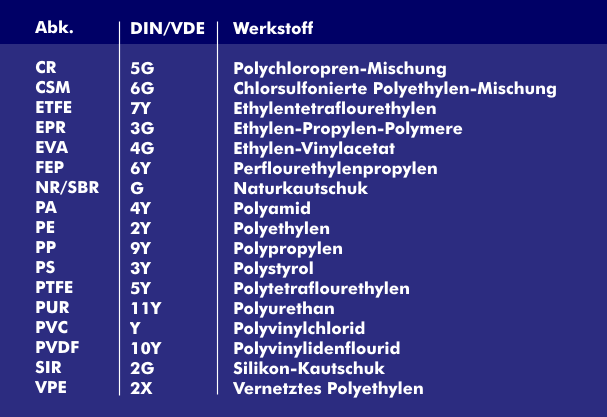 In addition, the insulation material, in the form of permittivity, also affects the capacitive impairment between pairs of cores. The permittivity or dielectric constant should be as low as possible. Values between 2.0 and 2.4, as exhibited by Teflon, polypropylene and polyethylene are ideally suited for insulation materials.

As far as temperature behavior is concerned, there are many applications in which temperature level and resistance are of primary importance. For example, in automotive engineering, when cable harnesses are laid in the engine compartment. In such a case, the insulations must be designed to withstand temperatures in excess of 100 °C, and they are already classified in temperature classes. Temperature class "C" reaches up to 125 °C and "D" up to 150 °C. Insulations made of polypropylene( PP) and crosslinked polyethylene(XLPE) are suitable for these applications. When considering the fire behavior of the insulation material, attention must also be paid to the generation of gases, especially in the tertiary range.

In addition to the task of insulation, it is also used for color coding of the cores and their correct assignment. However, the various standardization bodies have defined different color codes.