With the development of semiconductor technology, the first integrated circuits( IC) were introduced at the beginning of the 1960s. As can be seen from the name, this involves the integration of many electronic components into a circuit that is produced on a carrier material in a manufacturing process. 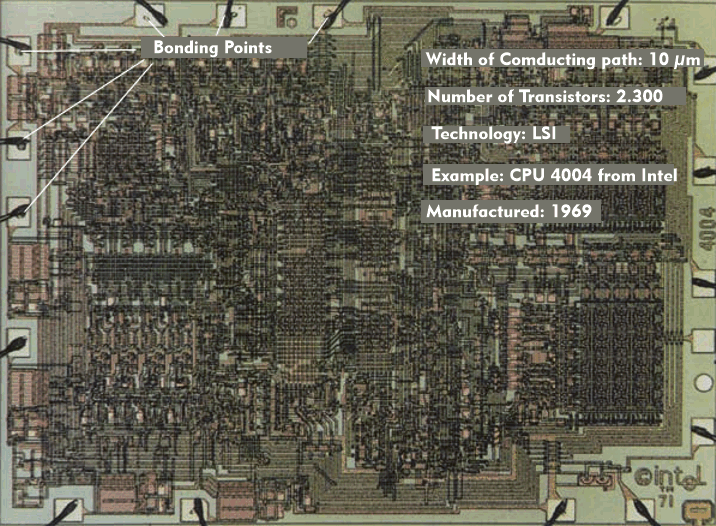 The electrical connections between the components are made by conductor tracks, which are vapor-deposited as a thin metal film. The integrated circuit is embedded in a plastic or ceramic housing and is thus protected from damage. The outwardly routed connection contacts are connected to the actual chip with ultra-fine contact wires. The outwardly visible size of the chip is due exclusively to the contacting and has nothing to do with the size of the integrated circuit.

The development of integrated circuits 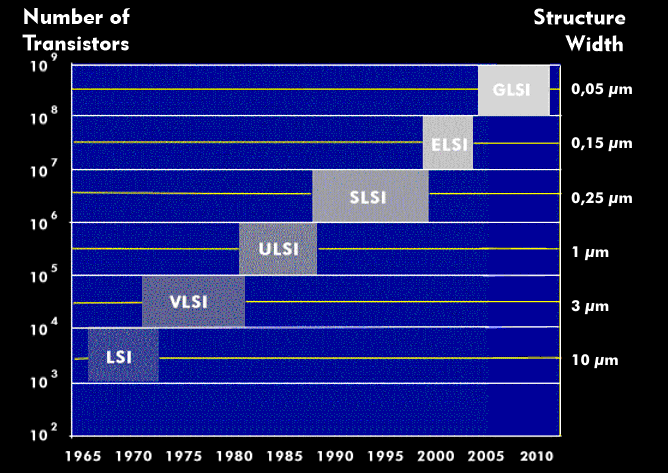 Development of the integration density and the structure width

The development of integrated circuits has been characterized by rapidly increasing functionality and, in the case of memory devices, memory capacity. It went hand in hand with the constantly increasing integration density, which could be realized by the continued miniaturization of the components and the conductor paths. Whereas in the 1960s the first logic components still had around 20 logic gates, in the 1970s the figure was already over 10,000 gates per chip, in the 1980s up to 1 million and by the end of the 1990s up to 50,000,000 transistors per chip. In 2007, IBM's Power6 introduced a central processing unit with 790 million transistors. With the increasing number of transistors, the structure width simultaneously reduced from 100 µm to 65 nm technology. Later, due to Extreme Ultraviolet Lithography( EUVL), structure widths of 45 nm, 20 nm and 10 nm could be realized.

The increased integration density made it possible to integrate entire circuits with central processing units, memories, read only memories( ROM), random access memories( RAM), controllers and I/O circuits on one silicon die, which led to the development of system-on-chips ( SoC) and later to network-on-chips( NoC).