The International Alphabet Number 2 (IA2) or CCITT-2 is a 5-bit code used forteletype (telex) and includes alphanumeric characters, digits, and punctuation and control characters. The teletype code was punched into a punched tape with a typewriter, read by the teletype machine, and sent.

Since a 5-bit code can represent a total of 32 different characters, this teletype code works with a double assignment of the bit combinations. Thus, all letters from A to Z, the digits 0 to 9 and some punctuation and control characters can be represented. 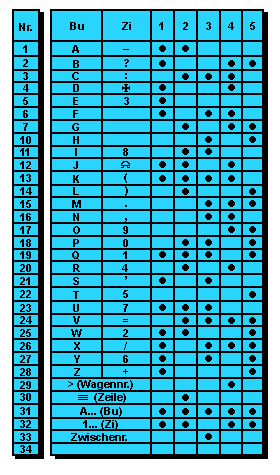 The punctuation marks include the hyphen (-), the question mark (?), the parentheses, the period (.), the comma (,), the equal sign (=), the slash (/), and the plus sign (+). Among the control characters the bell( BEL), the carriage return( CR) and the line feed ( LF). Furthermore, there are two toggle characters for switching letters, digits and characters, which is achieved by double assignment. The IA-2 alphabet evolved from the Baudot code and is known as the Baudot-Murray code or teletype code No. 2.