The IPX protocol enables addressing and routing of data packets in LANs over the Internet and forms the link between LAN and Internet protocols. As a network protocol, IPX not only forms the basis for communication within Novell networks, but is also used as an efficient solution for Netware-Netware interconnections. 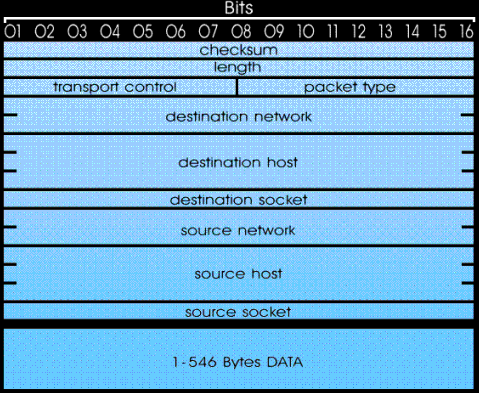 Structure of the IPX data frame

The IPX header consists of a two-bytechecksum field, an equally long length field, and two additional data fields for transport control and packet type. These data fields are followed by the address fields. The IPX address fields consist of three destination addresses: A 4- byte destination address for the network, a 6-byte node number for the host, and a 2-byte socket number. The node number is usually assigned by the manufacturer and is used to uniquely identify a specific system. The socket number is used to distinguish processes in a computer. For the sending stations there is the same address structure: 4 bytes for the address of the source network, 6 bytes for the source system and 2 bytes for the socket number of the source. The address fields are followed by the data field, which can contain a variable amount of data between one byte and 546 bytes. The Sequenced Packet Exchange Protocol( SPX), which is based on IPX, ensures secure transmission.