An electrical line is a wired, physical transmission medium. It is used for the transmission of current and signals and its transmission properties are frequency-dependent.

An electrical line can be considered as a series of an RL series circuit and an RC parallel circuit. Such a circuit affects the signal during transmission in both level and frequency characteristics. 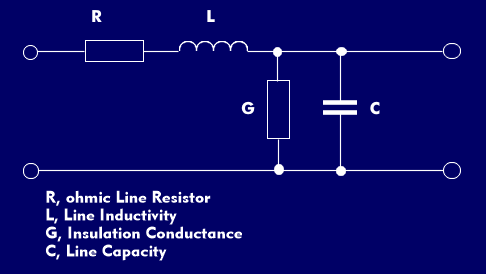 Equivalent circuit diagram of a line

From the equivalent circuit diagram it can be seen that the frequency behavior of a line corresponds to that of a low-pass filter. All line components attenuate the signals. They are length-dependent and, as far as line inductance and line capacitance are concerned, also frequency-dependent. These two line components impair transmission at higher frequencies much more than lower ones.

As far as the individual line components are concerned, the ohmic series resistance results from the specific resistance of the material, the line cross-section and the line length. The line inductance depends on the line length, the line cross-section and the distance to the returning conductor. The insulation resistance is again material-specific and length-dependent, and the line capacitance is dependent on the surface area of the conductor and the opposite surface area of the returning conductor. In addition to the ohmic DC resistance, there is also the AC resistance, the impedance. It is constant, independent of length and - at least theoretically - independent of frequency.