Local area networks (LANs) are systems for high- performance information transfer that enable a number of equal users to carry out a partnership-oriented exchange of messages of high quality. Local area networks are characterized by their spatial extent, the speed with which they transmit data, the structure of the architecture, the number of connectable stations and the way in which the connected stations access the transmission medium.

Local networks have a limited spatial extent and are therefore predestined for localized use in companies. The bridgeable distance between the connected stations is usually 10 km. In the case of classic Ethernet, the maximum extension is even considerably smaller due to the round-trip delay. As far as transmission speed is concerned, this value has increased from 10 Mbit/s to 400 Gbit/s since the development of Ethernet. The network architecture of local area networks has also changed. In the early years, Ethernet had a classic bus topology; Token Ring, another concept for a local area network, has had a ring topology since its development, as has FDDI. With Gigabit Ethernet, star topology was added. 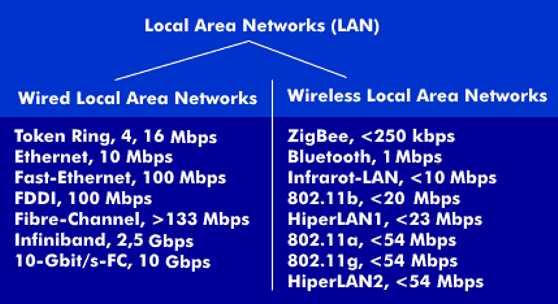 Overview of wired and wireless LANs

Conceptually, the following requirements must be met by local area networks: High bandwidth of the transmission medium for fast message transmission, a suitable topology to achieve the addressed goals, including high reliability and high modularity, suitable agreements on the communication flow, functional and procedural aids for optimal utilization of the possibilities given by transmission facilities and protocols on the part of the users, and an open system architecture to force modularity, expandability, flexibility and acceptance.