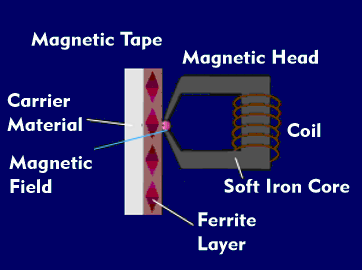 Structure of the magnetic head

According to the principle, in magnetic storage the magnetizable storage elements, the ferrites or iron oxide particles, are magnetically influenced by induction. This induction can take place, as in the case of core memory, by means of read/write wires which are passed through minute ferrite beads, or by means of a read/write head, as in the case of floppy disks, magnetic tapes, hard disks, etc. During magnetization, the magnetic material is guided past the read/write heads at a defined speed. During writing, the data is recorded in predetermined tracks according to specific recording procedures. During reading, the induction takes place in the opposite direction: the magnetized particles generate a small induction voltage in the read heads, which is amplified and processed in the sense amplifier.