The structure of optical networks

Components of an optical transmission link

Light modulation is done in NRZ coding, either directly, i.e. the laser beam is modulated in the laser, or externally, where the laser transmits a constant light beam that is modulated in a downstream modulation device, an electro-optic modulator, such as the Mach-Zehnder mod ulator or an electro- absorption( EA) modulator. For the signal reconversion, the conversion of the optical signals into electrical signals, APD diodes, PINdiodes or phototransistors are used in powerful systems.

Optical networks use the Synchronous Digital Hierarchy( SDH) or the Optical Transport Hierarchy( OTH) as transport structure and use optical network components, Optical Network Elements( ONE). These are optical amplifiers( OA), regenerators( REG), optical multiplexers( OMUX), optical crossconnects( OXC) and other components for dispersion compensation, filtering and wavelength division multiplexing(WDM). In addition, depending on the concept of the optical network, the light signals are converted into electrical signals via O/E converters, which are then switched via network nodes such as ATM switches, IP routers, SDH multiplexers and Ethernet switches and converted back into light signals via electro-optical converters.

In addition to optical networks, which use electro-optical and opto-electrical conversion on the transmission links, there are also all-optical networks (AON), in which amplification and switching are performed exclusively on an optical basis.

Optical networks can be found in the wide- area sector, in city networks and also in corporate networks. In the wide area sector, such networks are characterized by the lengths of the transmission links. These transmission links are constructed with single- mode fibers because of the large distances that can be bridged, and are specified by the International Telecommunication Union( ITU). The specifications take into account the attenuation, the distances that can be bridged with them, and the number of amplifiers that can be used. 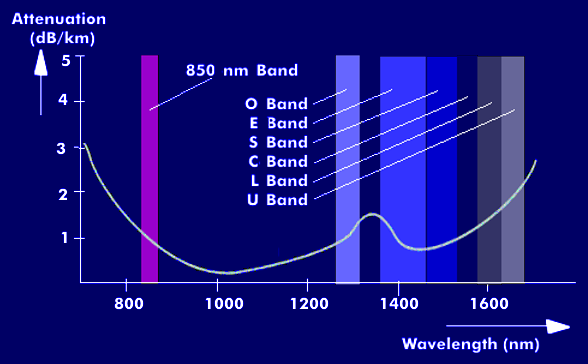 Wavelength ranges defined by the ITU for optical transmission

Longer transmission distances of up to several thousand kilometers can be realized using a transmission technique based on solitons. In this technique, the pulse broadening caused by chromatic dispersion is fully or partially compensated by pulse compression of the nonlinear effects. This pulse compression is caused by material properties of optical fiber in C-band and L-band.

Such soliton systems can bridge transmission distances of up to 20,000 km with data rates of up to 10 Gbit/s or 1,000 with 40 Gbit/s without intermediate amplification.