Parabolic antennas are dish-like directional antennas that have a parabolic reflector and are characterized by strong beam focusing of the electromagnetic rays. The shape of the reflector is a section of a paraboloid of rotation. In a receiving antenna, all parallel incident beams are reflected into the focal point, which is determined by the focal length and where the feedhorn with the antenna is located.

The beam reflection at the antenna dish increases the received field strength. To further increase the received field strength, a second, much smaller parabolic mirror, a subreflector, can be used, which is located in the focal point of the larger mirror and focuses the radio beams of the antenna in a second focal point. This double reflector antenna design is called a double reflector antenna. One version of this is the Gregory antenna. 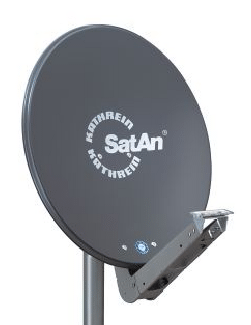 In the transmitting antenna, the rays are emitted in parallel from the focal point where the primary radiator is located via the reflector, which is also called the secondary radiator. In the process, the exciter, which is usually a horn radiator located at the focal point, illuminates the symmetrical reflector. The reflector dish itself is made of metal or of a grid construction. However, the empty spaces in the grid must not be larger than one tenth of the wavelength.

Structure of the parabolic antenna

At the focal point of the parabolic antenna, a low- noise converter( LNC) or low-noise block converter( LNB) is located on the feedhorn, a boom, which converts the received satellite signal.

Parabolic antennas have a high antenna gain of 20 dBi and higher, which depends on the diameter of the parabolic reflector. This also directly determines the aperture angle of the lobe-shaped radiation. In fact, there is a direct correlation between diameter and wavelength. For a 50-centimeter parabolic dish and a satellite frequency of 12 GHz, corresponding to a wavelength of 2.5 cm, there is an aperture angle of 3.5 degrees; for a parabolic dish with a diameter of one meter, the aperture angle is halved to 1.7 degrees. As with other antennas, the antenna pattern of parabolic antennas shows several side lobes and back lobes in addition to the strongly formed main lobe. The latter determine the return loss.

Parabolic antennas are used in directional radio and satellite communications. For satellite transmission oftelevision, parabolic antennas with diameters between 50 cm and 120 cm are used, depending on the reception field strength and location within the footprint. 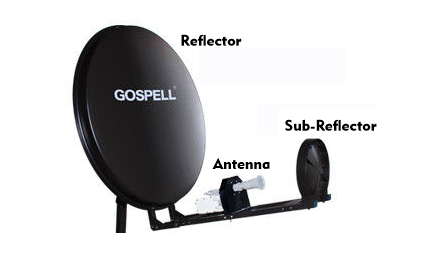 There are various versions of the parabolic antenna, which differ in the shape and rounding of the reflector keys, the arrangement of the focal points and the use of a sub-reflector. Depending on the design, one speaks of prime focus antenna( PFA), offset antenna, of double reflector anten nas like the Cassegrain antennas and Gregory antennas.