The PowerPC is a 32-bit microprocessor in RISC architecture, which was developed by IBM, Motorola and Apple in 1993. The PowerPC, which is used in Apple's PowerMac, has been available in many variants since 1993.

The first PowerPC processor was the 601 with clock rates between 66 MHz and 100 MHz and a processor performance of 80 SPECfp for floating point operations determined according to the uniform guidelines SPEC. The 601 has an address bus width of 32 bits, an internal data bus with 64 bits width and a level 1 cache of 32 KB.

Technologically, the 601 represents SLSI technology with an integration density of 2.8 million transistors. 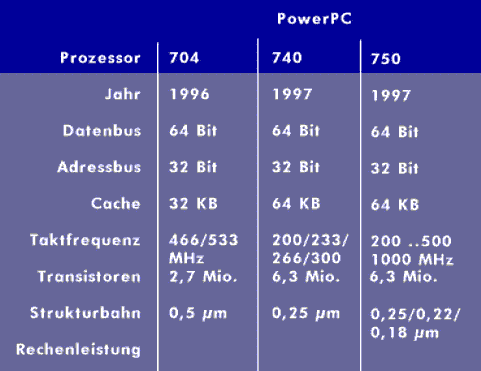 The further developments of the 6xx series were related to the computing power but also to the reduction of the power consumption so that these processors could also be used in laptops and notebooks. Thus, the computing power of the 604 was increased by a particularly powerful floating point unit( FPU) and by increasing the clock rate. In addition, the level 1 cache was expanded to 64 KB and power consumption was reduced in the e version. 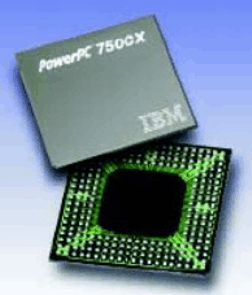 The 7xx series was characterized by performance improvements and the reduction of supply voltage and power consumption. For example, the supply voltage for the 740 was reduced from 2.5V to 1.9V. In addition, the PowerPC processors from Motorola and IBM differ technologically. Motorola integrates a 128-bit vector unit in the 7400, IBM integrates a larger cache in the 750. However, both companies increase the clock frequencies to over 1 GHz. 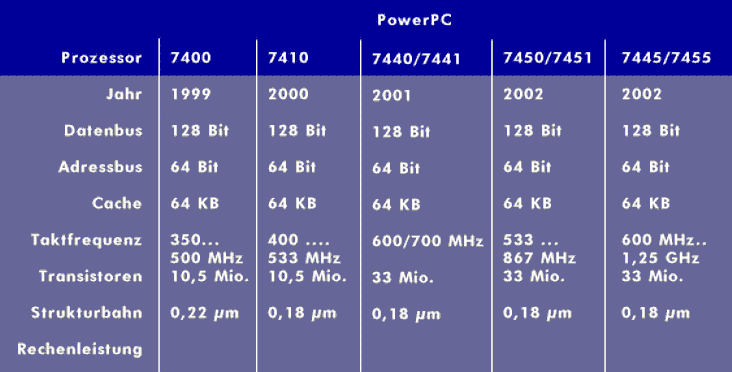 In the 7th generation processors, the 7400 was the first central processing unit( CPU) to achieve over 1 billion FLOPS of computing power, a performance equivalent to that of supercomputers.