Refraction refers to the change in direction that a beam of light, a sound wave or an electromagnetic wave undergoes when it passes from one medium with a certain density into another medium with a different density and the refractive indices of the two media are different. The law of refraction can be used to determine the angle of the incident and refracted rays. 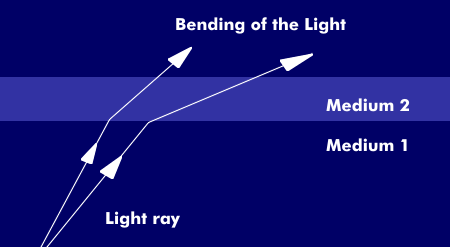 Refraction of light waves between media with different refractive indices

If the angle of incidence becomes shallower, total internal reflection may occur. Such a total reflection occurs only at the transition from an optically denser medium with the larger refractiveindex to an optically thinner medium with a lower refractive index. In terms of optical fibers, this means that the light beam from the core glass is refracted at the cladding glass and thus cannot exit the core glass.

Refraction can refer not only to the transition between two media with different refractive indices, but also to a change in density within a medium. Thus, the refractive index changes directly with the density change. The effect of continuous change of refractive indices is exploited in gradient fiber. The effect of refraction is also applied to compact discs( CD) and DVDs for reading out the stored data. While thedye of the storage layer is burned at certain points when the information is stored and thus becomes darker, the refraction of light at these points is different from that at the lighter, unburned points when the data is read out.