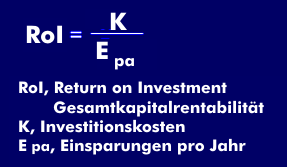 Definition of return on assets (ROI)

The ROI system originates from America and was developed in the 1920s. In Germany, the ZVEI (German Electrical and Electronic Manufacturers' Association) has further developed the system into a key figure system. Since return on investment is becoming increasingly important in all investment-related areas of IT technology, the return on investment can be determined from these key figures.

The profitability calculation is based on the turnover rate of the capital employed and the return on sales.