The high resolution of UHDTV 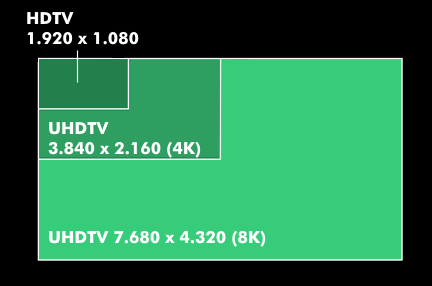 Image resolutions of HDTV and UHDTV

Thus, the high-definition UHDTV image has 16 times higher resolution than the HDTV image. In addition to the higher resolution, UHDTV can be displayed on displays larger than 100" and on projection screens such as those used in home the aters and cinemas, and it also has a much larger color gamut compared to HDTV and a higher dynamic range. Both color space and dynamic range are specified in the ITU BT.2020 recommendation, along with resolution and refresh rate. 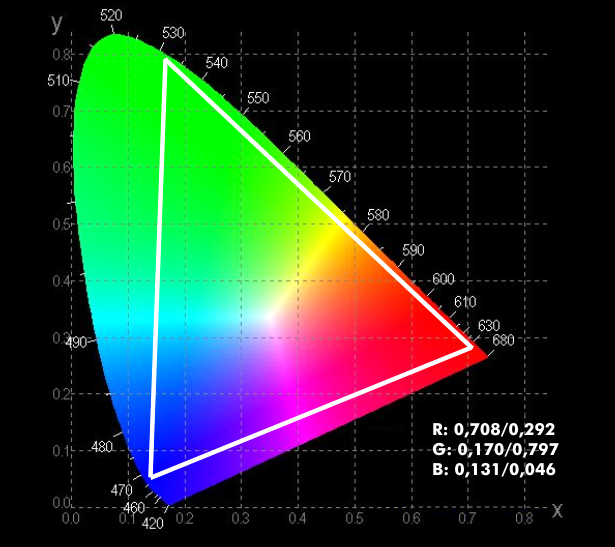 Color space according to BT.2020 for UHDTV

The UHDTV format, developed by the Japanese Broadcasting Organization, operates at a refresh rate of 24, 25, 50, 60 and 120 frames per second using interlaced or progressive scan. The number of pixels displayed in the RGB color model and the refresh rate result in a clock frequency of 47.7 GHz at 60 full frames per second. In addition, Super Hi-Vision, which is the Japanese term for Ultra HDTV, features sound transmissionwith 22.2 sound channels. The 22.2- channel sound uses twenty ceiling, plane, and floor speakers, as well as 2 subwoofers. The entire data stream requires about 500 Mbps. After compression, the two data streams together have a bandwidth requirement of about 600 Mbit/s and transmission rates of up to 6.6 Gbit/s, which must be transmitted by radio.

The recording, storage and transmission technology for UHDTV. 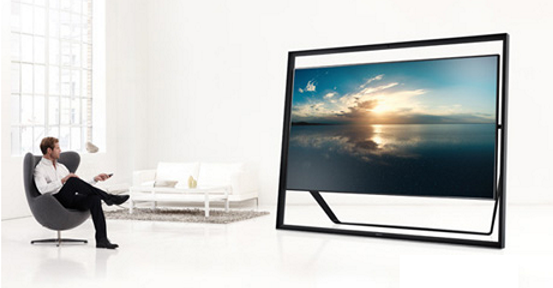 In order to be able to transmit the entire data stream of 500 Mbit/s, the radio transmission works with the most modern modulation and antenna technologies. Orthogonal Frequency Division Multiplex( OFDM) is an efficient modulation method that is combined with the antenna-based MIMO method, Multiple Input Multiple Output (MIMO). These techniques can be used to transmit high data rates in a limited bandwidth in VHF and UHF bands and using Long Term Evolution( LTE).

In the early years of UHDTV, the extremely high resolution could not be supported by camera technology. During this time, the HDTV image was divided into several individual images, one next to the other and one above the other, which came from sixteen cameras and were combined to form a UHDTV image. In the meantime, corresponding UHDTV cameras are available for 8K and 4320p (progressive scan). In terms of storage technology, these amounts of data can only be stored in experimental setups for the time being. For example, the Japan Broadcasting Corporation (NHK), which developed UHDV, has used sixteen HDV recorders in an array to store the data volumes.

The ITU-R has developed a recommendation for the data transmission of UHDTV data streams using Large Screen Digital Imagery( LSDI), which is specified in ITU Recommendation J.601. The UHDV format was developed as the video format.