Like the Blu-Ray disc, UDO technology uses short-wavelength blue-violet laser light with a wavelength of 405 nm and with a numerical aperture( NA) of 0.70 or 0.85, and as with the DVD, the data is written in a phase-change process into a layer that is only 100 µm thin. The short-wavelength light allows the density of pits and lands to be significantly increased compared to longer-wavelength light. Storage density ranges from 1.15 GB/cm2 to 4.65 GB/cm2.

Technical differences between a DVD, UDO and PDD

The sectors of the UDO disc are 8 kilobytes( KB) in size, and the blocks for error correction( ECC) are exactly the same size. UDO discs are available in three versions: as "True Write Once" for writing once and with erase protection, as "Compliant Write Once" with erase function and as "Rewritable" (UDO- RW), which can be written and erased 10,000 times. 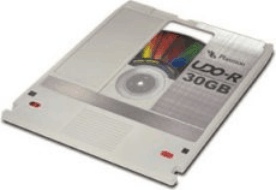 The UDO drive was developed with the highest precision and features a Mean Swaps Between Failure( MSBF) of 750,000, making it suitable for backups in jukeboxes. Other formats competing with the UDO disc are the HD-DVD, the Professional Disc for Data( PDD) and the Enhanced Versatile Disc( EVD).