Virtual networks or virtual LANs (VLAN) are a technological concept for implementing logical workgroups within a network. Such a virtual network is implemented by means of LAN switching or by means of virtual routing on the link layer or on the network layer. Virtual networks are built by a set of switching hubs, which in turn are interconnected by a backbone. The IEEE802.1Qworking group has addressed this issue. 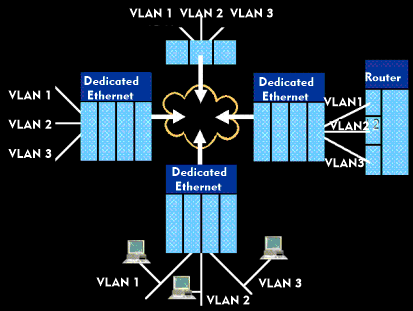 Virtual networks form a broadcast domain based on physical LAN segments that can be freely defined according to certain criteria. Thus, there is a connection on the media access method( MAC) with or without additional evaluation of information from the network layer.

VLANs combine the advantages normally associated with networks connected by bridges, such as easy addition/removal or modification of a station, together with the advantage of logical system separation and structuring by means of routers, but without having to accept the throughput problems of bridges and the difficult configuration of large networks with routers. Virtual networks are implemented with switches of the type found in Dedicated Ethernet and with high-speed backbone technology. 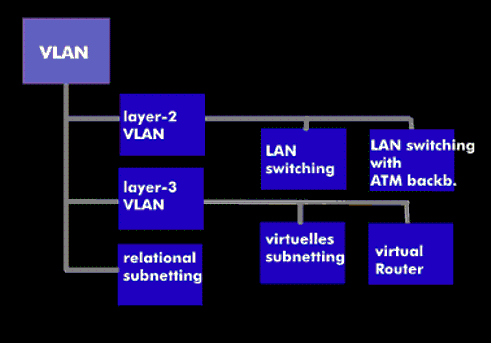 Packet switching on the virtual LAN

All traffic in the virtual network is realized with packet switching, i.e. addressing is done in the flat address space oflayer 2 addresses( data link addresses). However, the address space is limited to 4,096 VLAN IDs.

The switching systems have a learning algorithm similar to that of traditional bridges. This means that a station can easily change physical location and still remain a member of the virtual network without requiring reconfiguration at the end station. This allows for the creation of location-independent workgroups. In addition, data link address orientation has the advantage of protocol transparency: unlike router-based techniques, different layer 3 to 7 protocols can be used even within a workgroup. This design keeps traffic within a logical workgroup or within a virtual network. Broadcasts on one virtual network are in no way forwarded to another virtual network.

An extension of VLAN technology is provided by the Virtual Extensible LANs(VXLAN) infrastructure protocol, which provides 24 bits for the address range.