Like the echo or reverb effect, chorus is a specific way of influencing the sound during audio processing. Chorus is used to create a fuller sound by multiplying existing voices or instruments.

Like most audio effects based on delaying and phase-shiftingfrequencies and then adding them to the original signal, Chorus works with signal delays. Thus, chorus can be created by a combination of the input signal to the chorus circuit and delayed copies of the input signals. The pitches and their deviations are mixed by a variable delay of the signal copies. The pitch deviation is extremely slow and controlled by a Low Frequency Oscillator( LFO). 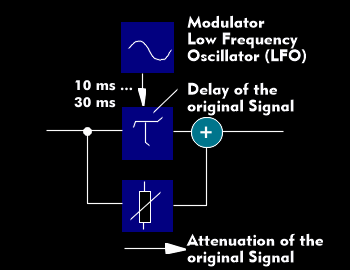 However, the delay times used in chorus are only in the range of 10 ms to 30 ms. The result is that certain frequencies are changed in phase in such a way that they are partially or completely cancelled out when mixed with the original signal, or are raised in amplitude; depending on how high the mixed amplitude is. To prevent the effect from repeating statically at the same frequencies, the delay time is modulated by a low- frequency oscillator (LFO).