Theoretically, this is also possible, but in practice there are considerable physical limitations. These are mainly due to the extremely low energy generation, which depends on the field strength and thus on the distance to the transmitter. It decreases linearly with distance, and the power flux density even quadratically. This means that energy transmission, if at all, can only take place in the immediate vicinity of a hotspot. At ten times the distance from the hotspot, only one hundredth of the radiated energy is available.

Under these conditions, wireless power transfer (WPT) by means of radio becomes relative. Airnergy should therefore be seen more as a thought-provoking approach for the future. 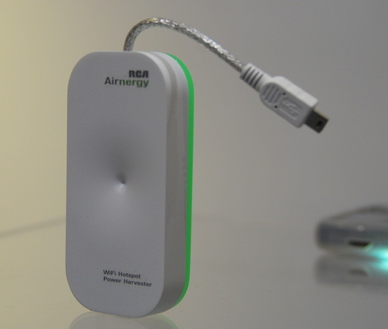 In the Airnergy concept, the hotspot is powered via the USB interface of a computer. A power transfer only takes place under the mentioned conditions. However, it is extremely low and, depending on the distance between the hotspot and the cell phone, is likely to be in the microwatt range.

In addition to the Airnergy concept, there are two other radio-based energy transmission concepts, PowerBeam and WiTricity.