All decibel specifications always represent the logarithmized ratio of two electrical quantities( voltage, current, power). This is also the case with the decibel milliwatt (dBm), which represents a power level in decibels, referred to 1mW. The decibel milliwatt can refer to the generation of signals or to the sensitivity of electronic components, but also to attenuation or amplification. 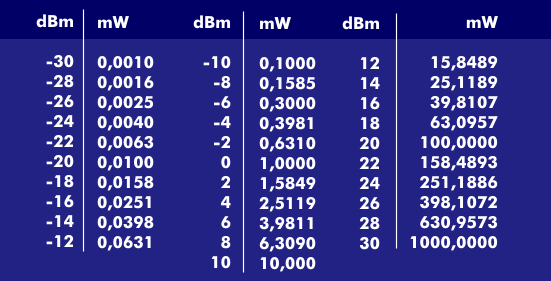 Conversion table from dBm to mW

Nomogram for the conversion from dBm to µW

In optical systems, 1 dBm is used as a reference for the absolute reference power (P0) of 1 mW, expressed in dBm. The following relationship exists between the power (P) in milliwatts (mW) and the dBm value: `p=10*log(P/P_0)` in dBm.

The dBm values can be used to determine power and attenuation budgets in transmission and FOC systems in the simplest way. For example, the power of 1 microwatt (µW) corresponds to -30 dBm, of 1 nanowatt (nW) to -60 dBm, and of one picowatt (pW) to -90 dBm. For example, if an optical light source such as a laser diode generates a light signal with a power of +10 dBm, and this signal is attenuated by 4 dBm during transmission, the resulting signal level is +6 dBm.