Diodes are semiconductor devices that allow current to flow in only one direction. They consist of two electrodes, anode and cathode, and only allow current to flow when the anode is more positive than the cathode. For example, if a sinusoidal alternating voltage with alternating polarity is applied to the anode, then current will flow through the diode only during the positive half-waves. The negative half-waves are blocked and voltage changes occur at the working resistor which correspond to the positive half-wave of the sinusoidal signal.

The diode thus fulfills the function of a rectifier but also that of an electronic switch, which is used in DRL logic (Diode Resistror Logic) and DTL logic (Diode Transistor Logic).

Historically, the diode evolved from the tube diode and the tip diode, also known as the detector. In the semiconductor diode, a pn layer formed by p material and n material takes the place of a pointed conductor contacting a crystal. The transport mechanism of the current flow corresponds to that of a semiconductor with electrons and holes. 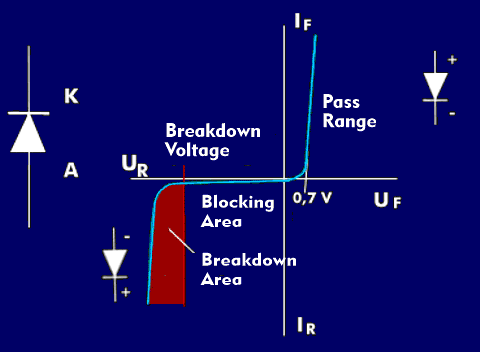 Circuit diagram and characteristic curve of the silicon diode

The I-V characteristic of the diode has a forward region, a reverse region and a breakdown region. The forward region depends on the semiconductor material and shows a characteristic starting at 0.7 V for silicon( Si) and 0.3 V for germanium( Ge). The blocking range is the voltage range in which the diode blocks. This can be 100 volts and more. For power diodes, the reverse voltage is several kilovolts (kV). An increase beyond the reverse voltage range will cause breakdown. Breakdown voltage is a non-reversible voltage range that leads to destruction of the diode. It is used in Zener diodes and characterizes the Zener voltage.