In MPEG compression, macroblocks with different information content are formed based on the similarity of successive video frames, the Group of Pictures (GOP). Within these groups of pictures, the pictures are compressed one after the other, starting from the data-intensive initial picture of the group, the intra- frame(I-frame). This frame forms the information base for the subsequent frames and defines the reference within the video sequence. The I-frame is compressed in a similar way to JPEG.

The following frames are the bidirectional frames (B-frames), because they depend equally on the preceding frames as well as the following ones and use them as reference. They are particularly highly compressed frames, because only the differences to the neighboring frames serve as information. A B-frame group is followed by a predicted frame( P-frame), which is based on the prediction from the intra-frame. The P-frame is oriented to the reference frame, the I-frame, forms the reference points for the I-frames and is particularly important for decompression. 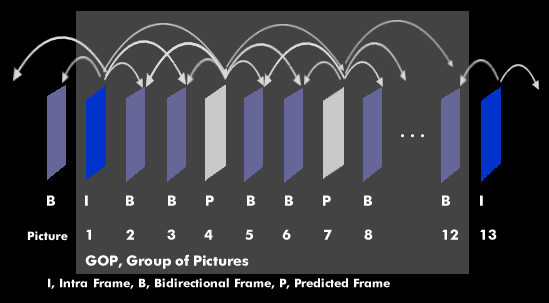 The order of the different frames is determined during MPEG encoding. However, care must be taken to ensure that only the intra-frame can be used for processing. A typical GOP structure starts with the I-frame, ends before the next I-frame and looks like this: IBBPBBPBBPBB.

The length of the GOP frame depends on the video codec setting and ranges from 0.5 seconds for MPEG-2 to over 10 seconds for MPEG-4. In addition to video encoding, MPEG compression also includes multi- channel audio encoding, which is implemented in MPEG-1 audio and MPEG-2.