NiCd batteries are rechargeable secondary cells that are extremely robust and feature good performance data. In the NiCd(nickelcadmium) battery, the positive electrode is made of nickel hydroxide, the negative electrode of cadmium( Cd). Potassium hydroxide (KOH) is used as the electrolyte.

The NiCd battery is capable of being deep discharged, overcharged, has an extremely low internal resistance and a long shelf life and life span when discharged. In addition, it can be charged and discharged several thousand times. The rated voltage is 1.2V, the end-of-charge voltage is between 1.4V and 1.65V, the end-of-discharge voltage is between 0.8V and 0.9V, and the charging current is 1C( coulomb) to 3C. NiCd batteries are charged using the constant current charging method. The energy density is about 100 Wh/kg and the power density, the ratio of power to weight, is relatively high at over 200 W/kg. NiCd rechargeable batteries in the larger designs (KR20) achieve nominal capacities of over 8,000 mAh. 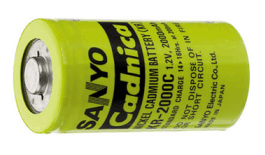 Device battery as a baby cell with 2000 mAh, photo: Sanyo

The self-discharge rate is about 0.5% per day. The number of charging cycles is about ten thousand. When incompletely discharged, the NiCd battery has a permanent reduction in performance caused by the memory effect. Since NiCd batteries can be damaged by a deep discharge just as much as by overcharging, chargers with delta-U cutoff should be used. These switch off the charge current when the charge voltage curve changes to a flat curve.

The various designations for device batteries

According to the EU Battery Directive, portable batteries may contain a maximum of 20 ppm cadmium. There are still exceptions, but it can be assumed that these will soon be restricted and the NiCd battery will no longer be allowed to be offered in the foreseeable future.