Photovoltaic(PV) systems are solar power systems that either operate autonomously and generate electricity for their own application, or feed the generated electricity into the low- voltage grid. In the first case, they are stand-alone systems that temporarily store the direct current generated in their own home storage units. When needed, the consumer draws the direct current directly from the home batteries.

Such stand-alone systems are used wherever connection to the low-voltage grid is too far or not feasible. Stand-alone systems are also called off-grid systems because they are not connected to the power grid. Off-grid systems are used in vacation homes, mobile homes and mountain huts, but also in traffic control, parking machines, relay stations, satellites, lighting of buildings, etc. but also small devices with photocells such as clocks, radios, calculators or measuring instruments. All the above mentioned devices and appliances have their own battery, which is charged by the PV system or solar cell via a charge controller.

The concept of photovoltaic systems 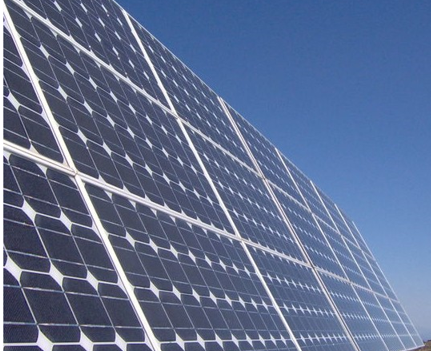 Generally, PV systems consist of several solar modules grouped together. To maximize the energy production of the PV modules, there are PV systems with rotating and pivoting photovoltaic modules (PV modules). These tracking arrays always align their solar modules according to the solar radiation. The solar modules, grouped together in arrays, are connected in series, called strings, and connected to an inverter. In this concept, the DC voltage supplied by the solar modules is converted to AC voltage in a central inverter located in the grid-feeding device. The conversion must be frequency-accurate and phase- synchronous with the mains voltage of 230 V and 50 Hz. The concept of the central inverter dates back to the 1970s and requires that all PV modules connected in series generate the same current and all PV module groups connected in parallel generate the same voltage to produce the highest power. If parts of the system are dirty or have different tilt angles or are in the shade, then they generate less current and the series current drops. The same applies to the voltage. The PV system then does not operate at its optimum efficiency. This is also specified as Power Conversion Efficiency( PCE).

As an alternative to the centrally operating inverter concept, there are decentralized concepts. Solutions that use small inverters, micro-inverters(DC to AC), or DC/DC converters are designed so that one converter is assigned to each PV module. The converters ensure that the PV modules always operate at the maximum power point( MPP). In the case of the micro-inverters, the AC voltage generated is fed directly into the low-voltage grid. In the case of the DC-DC converters, the central inverter continues to be used. The concept is that the voltage from the series-connected DC-DC converters is converted to grid voltage by the central inverter.

The advantage of both concepts is higher efficiency and independence due to individual PV modules with different power, their irradiation conditions, orientations or soiling.