The Optical Transport Unit (OTU) is the data frame defined in the ITU standardG.709 for transmission in optical networks. The data frame consists of three data fields: the overhead( OH), the user data and the forward error correction( FEC). In the user data field, the payload, is the user data defined in the optical transport network ofATM, Synchronous Digital Hierarchy( SDH), Ethernet, 10GbE or others. This can be STS signals, but also Ethernet or IP packets. The entire data frame is divided into rows and columns, where one column corresponds to one byte. 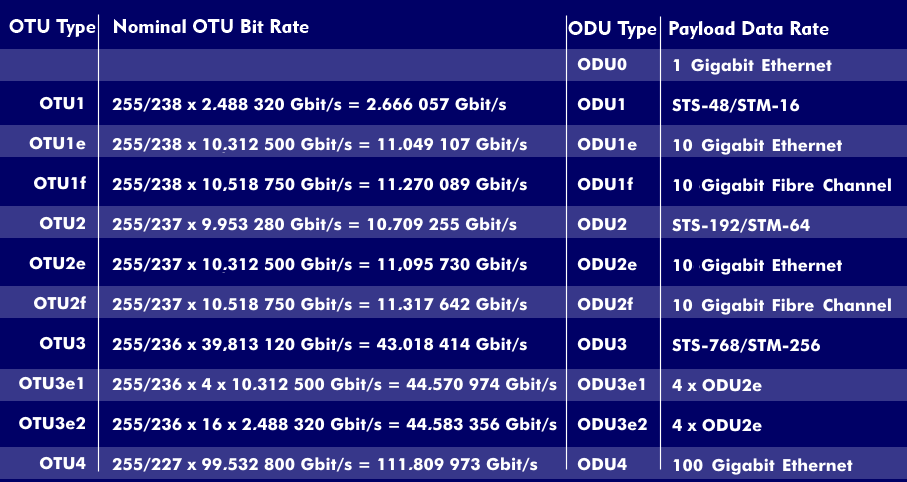 OTU types and their transmission rates

OTU-4 with 111.809 973 Gbit/s. The data rates of over 40 Gbit/s are achieved using a special modulation technique, RZ-DQPSK. In conjunction with Dense Wavelength Division Multiplexing( DWDM), up to 6.8 Tbit/s can thus be transmitted via an optical fiber. This theoretical value is calculated from the transmission rate of 43 Gbit/s and the 160 different wavelengths of DWDM technology.

The OTU1 and OTU2 versions work with different mapping. OTU2 uses stuffing for a certain number of fill bits. As a result, Synchronous Digital Hierarchy (SDH) and four ODU1 have the same clock rate. For 10 Gigabit Ethernet (10GbE), the OTU1 mapping results in OTU1e and for OTU2 mapping results in OTU2e. For Fibre Channel, the OTU1f and OTU2f variants are created because the data rate of10 Gigabit Fibre Channel differs from that of 10 Gigabit Ethernet.